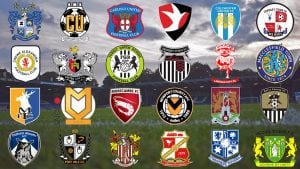 The great thing about League Two is that it is arguably one of the most competitive divisions in England and is always a close competition. A lot of teams will be competing for the promotion positions but only 3 will get it, which makes this league so competitive. Then at the bottom of the table, 2 teams will be relegated and will be stripped of their football league status, making their way into non-league football, the Conference Premier. In this prediction page, we will analyse the potential teams in competition for promotion and also relegation.

Just to add a little background of how the season may unfold, there is a clear favourite to be crowned the champion of League Two, and that is MK Dons. MK Dons could possibly be the favourites due to their relegation from League One. Other contenders include Notts County, Mansfield Town, Exeter, Stevenage, Swindon Town. In terms of teams predicted to be fighting for survival, there are a quite a few contenders, including Macclesfield Town, Tranmere Rover (who both got promoted from the Conference Premier), Bury, Oldham, Morecambe, Forest Green, Yeovil Town.

Betting on Accumulators are a good way to win big amounts of cash with low betting stakes, especially on specific leagues where there will be a lot of games during the week. League Two has 24 teams in which means big accumulators can be made. Also adding in other fixtures from other leagues may help, for example, the Championship and League One.

As mentioned before, MK Dons have just suffered relegation from League One during the 2017/18 season and have suffered 2 relegations now in the past 3 seasons, which proves the ups and downs of MK Dons in recent years. Many people were shocked at the relegation of MK Dons and this adds to the reasons why we predict they will bounce back. MK Dons have a really strong-looking squad with the new additions that have been brought in and it will be interesting to see where they do end up come the end of the season. Ladbrokes have amazing odds of 5/1 for them to win the league!

Lincoln is on a brilliant path at the moment. Following their promotion from the Conference Premier in the 2016/17 season, Lincoln City reached the playoffs in their first season of League Two, which is a brilliant achievement for any club. They will definitely be proud of that. However, that creates expectations and therefore for the 2018/19 season, promotion is their aim. Will brilliant talent coming through the door and key players staying at the club, Lincoln really do have a lot to be excited about. Sporting Bet has labelled Lincoln at 3/1 to win League Two!

Mansfield should be extremely confident and excited to try and get themselves back into League One. They are looking good coming into the new season, spending a lot of money for a team of that level over the past few years. Quality has been added to the club and as long as the confidence and focus are there, they will definitely be a League One side next season. New signings include players such as Neal Bishop, Tyler Walker and Otis Khan. This gives a good mix of talents in the squad. Mansfield is very low odds to get promotion, Betfair has labelled them at 2/1 for promotion and 10/1 to win the league completely.

Morecambe could count their lucky stars last season, escaping relegation only through goal difference! They can consider themselves lucky but also congratulate themselves on staying up and fighting till the end. However, it will be an uphill struggle this season and maybe their luck might just run out, well so we predict. Only 2 teams can get relegated from the division and there are a few other candidates in the running to get relegated, so maybe they can pull it off again and stay up! BlackType have measured Morecambe at 11/8 to be relegated, leaving them the favourites.

Macclesfield Town spent a good few years out of the football league. After spending seasons in the conference premier and looking stuck there, they finally managed to carry momentum through the whole season and come out on top, as Conference Premier Champions! We now this is a new and harder challenge for the Silkmen. Macclesfield has had a bit of an edgy transfer window, losing some of their best players to teams higher up than them, however, they’ve also brought in a lot of new faces. Hopefully, the new squad can gel together and avoid relegation this year. Football League is where they deserve to be and stay so let’s see what tricks they have up their sleeve. The bookies are not too confident with Macclesfield Town and 10Bet have labelled them at 9/4 odds to get relegated this season.